Ready to go back a few months? This will be another post where I talk about important things that happened in the Kpop world quite recently that I wasn’t able to post about by that time. In fact, all posts in which there’s a date in the title will be that kind of posts. 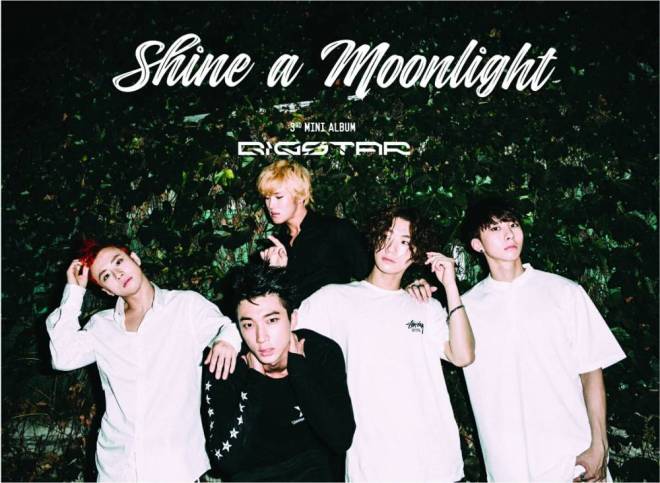 On the past September 3rd, Bigstar dropped their 3rd Mini Album entitled Shine A Moonlight.

I’m going to be honest here, I didn’t really know about their existance untill Full Moon Shine (the title song of their mini album) came out and they started promoting it by performing on music shows. But I’m sure it was only because I haven’t been into Kpop for that long by the time and this was their first comeback after quite the hiatus.

The truth is, as soon as I heard the damn song for the first… it legit BECAME MY JAM OHMYGOD. (Putting aside the poor grammar on their mini album title because that’s not going to state wether they have talent or not) I can’t even put into words how frustrated I feel because Bigstar are so. damn. UNDERrated.

Full Moon Shine is definitely one of my favorite songs from 2015. Have you heard it yet? If not, click here

The song is pretty simple, but it’s also interesting. It’s not very uptempo but it’s still catchy. The lyrics are also pretty good and I think people who usually pay a little more attention to them should go google the lyrics for this song. ALSO, since it’s quite a slow song, their voices sound soooo soothing asdfghjkl

I wasn’t amazed by the choreo for the title track but I believe there wasn’t much they could do with a slow song. What I mean is, the fact that the song’s a little slow, they weren’t able to work on some awesome uptempo choreo (because they totally can, they are also talented in that way) however, both the song and the choreo are good regardless.

As for the music video, well, they clearly didn’t put much thought into it either. It’s not their best MV nor is it my favorite, it’s… quite plain, but it’s still nice. Once again, I think in this aspect the song itself didn’t really help.

The rest of the mini album… well, I promise you every track is LIT, speacially if you’re one for the hip hop/R&B-ish kind of Kpop (of course, each person’s music taste varies but still) go check it out and show Bigstar some love~~

I’m not saying they’re the best artists out there, but they sure are far more talented than most people think and they deserve way more recognition. I’ve noticed that some people don’t like them because of something to do with the CEO of their company who is also their producer and has produced a whole bunch of hits for other artists… but I don’t really know why that has to do with them. Anyone knows anything about this? If yes, please comment because I’d like to know.

With that, I want to ask you not to jugde an artist based on random issues regarding their CEO, or company or random rumors because we’re never really aware of how things go down on the backstage if you know what I mean… But we all know the Kpop industry is hella tough and I’m sure all idols work their asses off to always present an amazing show and please their fans so, please, always support your faves through the hard times if you truly trust them ♥

What are your thoughts on Bigstar? What did you think about Full Moon Shine? Tell me in the comments below!